Airlines stocks are under pressure.

Bill Baruch, president of Blue Line Futures, says this is the time to buy on weakness.

“Seasonally, this is when you want to be looking to buy airline stocks,” Baruch said Monday on CNBC’s “Trading Nation.” “That’s because crude oil peaks in September, October and over the last 20 years has averaged from peak to trough about an 8% sell-off, and this brings a good support to airlines. So, I’m not saying the top in crude oil is here right now, but we could see crude oil top around $65 to $66 [per barrel], and that again is going to be supportive to airlines.”

Crude oil would need to rally another 5% to reach the low end of that range.

Baruch is eyeing two names in the group that he says have strong trend lines. 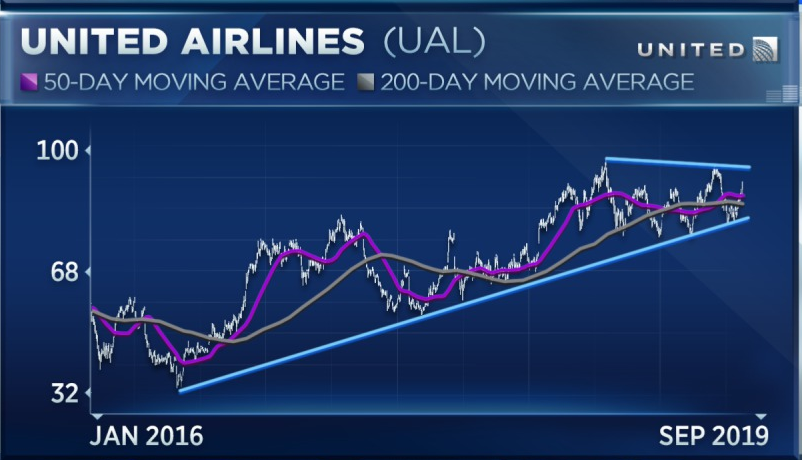 United has outperformed the market recently, climbing 7% in the past month, while the S&P 500 has rallied nearly 4%. Baruch’s second pick, Southwest, has done even better with a 12% jump since August.

“Southwest is about to see the 50-day moving average cross out above the 200-day. It’s held the trend line support, and then that could really bring a tailwind moving it up to somewhere in the ballpark of $60 to that trend line resistance. So I think these are opportunities to buy,” said Baruch. 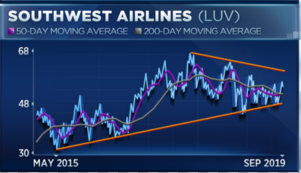 “In our work, they don’t look terribly cheap. We look at relative price-to-sales ratio. We had owned the group a couple years back and, actually, they got into our sell ranges and we got out,” she said.

She looks to another angle in the sector.

“We’ve been expressing our commitment to the space through the couriers like Fedex and UPS, who frankly are not down much today, and we’ve got earnings with Fedex tomorrow,” Tengler said in the same interview Monday.

UPS and FedEx have climbed 6% and 11% over the past month, respectively. FedEx is reporting earnings Tuesday afternoon.

“This is a group that’s also been pummeled by trade, so we think there’s more positive catalyst for that group, less dependent on oil than the airlines,” Tengler said.