Latest News
Home /The worst-performing stock in the S&P 500 this year has more room to fall, analysts say

Kraft Heinz is getting squeezed.

The stock fell by over 4% on Tuesday after private equity firm 3G Capital — its second-largest shareholder after Warren Buffett — said it sold 25 million shares of the ketchup maker’s stock.

And unfortunately for shareholders, things look like they could get even worse, warns longtime technical analyst Mark Newton, president and founder of Newton Advisors.

“The only thing that we can say is that momentum has gradually gotten less bad, and that’s really not sufficient to call a bottom in a stock that’s just continued to move lower,” Newton said Tuesday on CNBC’s “Trading Nation,” citing a four-year chart of Kraft Heinz stock. 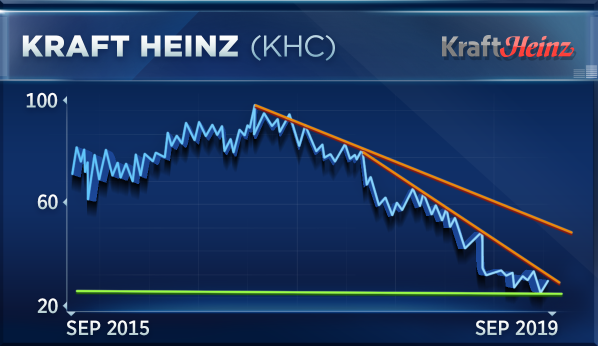 “Unfortunately, the downtrend is very much intact,” Newton said. “We have lower lows, lower highs, and in technical analysis, you want to see at least some evidence of that trend being broken before you can take a real stand. Saying it’s oversold is just, unfortunately, not sufficient, even if it’s a well-known brand name, to say that I want to take a real stab at trying to buy.”

For Newton, the proof is in the ketchup.

“I want to see that proof, and unfortunately, it’s just not there yet,” he said. “We continue to hear negative news and more volume to be on the downside and people ditching it, so I want to avoid and/or wait before I take a step in the water.”

Michael Binger, president of Gradient Investments, had a similarly dismal outlook on the consumer food giant.

“The playbook here when they put this merger together is that you lever up, you get a couple of big, strong, activist-type investors and … Warren Buffett to come in, you cut a lot of costs, you talk about synergies and then you spur some growth in more niche and growth-oriented areas,” Binger said in the same “Trading Nation” interview.

“Well, they cut costs, they got some synergies, but there has been no growth in their core — I’m even going to call it commodity — type of business: ketchup, cheese, mac ‘n’ cheese, those kinds of things,” Binger said.

In addition, he noted, the company has cut its dividend as well as its profit forecasts, leaving investors with these questions that shouldn’t go unanswered.

“You sum all these things together [and] it’s just a no-growth company,” Binger said. “They can’t go out and acquire right now because they’re levered up so much. I think it is kind of a value trap at this point in time. I’m with Mark; there’s no proof that it’s not.”

Even with a price-to-earnings multiple of about 10 times next year’s estimates, which is cheap for Kraft Heinz, it could still get cheaper, Binger said.

“I think it could still fall a couple of bucks,” the investor said. “I certainly don’t think there’s any catalyst to drive it higher from here in the current time period.”

Kraft Heinz is expected to issue its next earnings report on Nov. 7. It will be the second earnings release for CEO Miguel Patricio, formerly of AB InBev, who was tapped to lead the company earlier this year.