U.S. stocks reversed early gains on Friday after reports that the White House is considering limits on U.S. investment into China, aggravating the protracted trade dispute between the globe’s two largest economies.

Trump administration officials are discussing ways to limit U.S. investors’ portfolio flows into China, a person familiar with the situation told CNBC. One of those options includes limiting all U.S. investment in China. Though the person cautioned that the discussion was still in early stages, such an action could send shockwaves throughout financial markets and involve the billions of dollars in investments tied to major indexes.

The Dow Jones Industrial Average erased a gain of about 130 points following the report and was last seen trading down 14 points. Merck was the worst performer in the Dow, down 0.8%; Pfizer, the leader, gained 0.9%. The S&P 500 also reversed all of its gains to trade down 0.3% amid losses in communications services, utilities and technology. The Nasdaq Composite dropped 0.5%.

Shares of Alibaba and other Chinese companies, in particular, plunged on the latest U.S.-China headlines, falling 5%. Baidu and JD.com also traded lower. Those shares all trade on Nasdaq.

Bloomberg News, which first reported that the Trump administration was considering limiting U.S. investments into China, added that among available options is delisting Chinese companies from U.S. stock exchanges and limiting Americans’ exposure to the Chinese market through government pension funds.

The person familiar with the matter told CNBC that the efforts to curtail American investment in China would be undertaken with the goal of protecting U.S. investors from excessive risk due to lack of regulatory supervision. The White House declined to comment on the report. 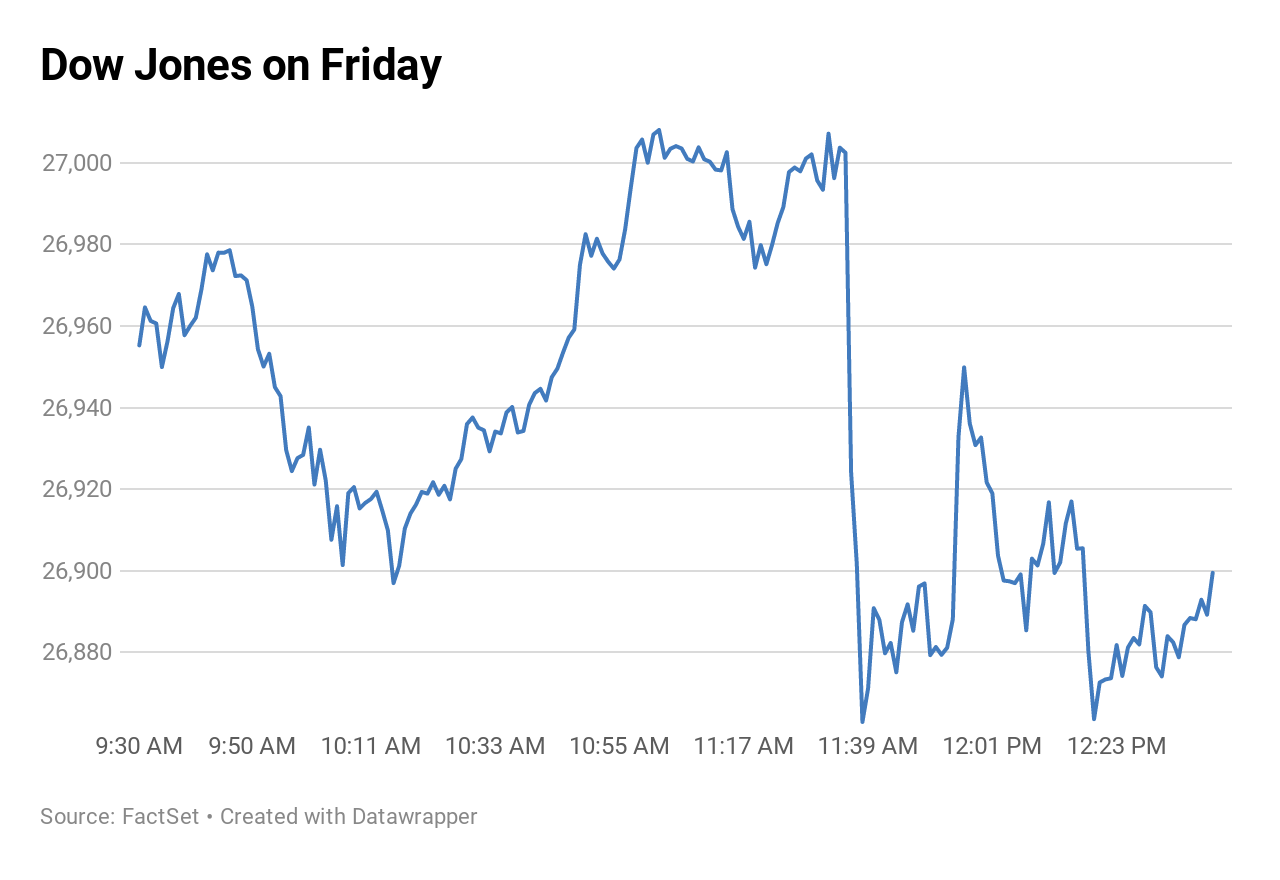 Notwithstanding the latest reports, trade talks between the U.S. and China are set to resume Oct. 10-11 in Washington, D.C., three people familiar with the discussions told CNBC. News of a scheduled meeting added to Wall Street’s conviction that the trade war between the two economic superpowers has eased in recent weeks.

President Donald Trump on Sept. 11 agreed to delay a planned escalation of tariffs on Oct. 1 that would have coincided with the anniversary of the People’s Republic. A spokesperson for China’s Ministry of Commerce, meanwhile, confirmed Thursday that the country had purchased a “considerable” amount of American soybeans and pork.

The two countries hope to end the tit-for-tat tariff war that has resulted in each country imposing billions of dollars’ worth of taxes on each other’s imports.

Shares of chipmaker Micron fell 9.7% on Friday after it reported first-quarter guidance that fell short of analyst expectations, dragging others in the semiconductor space lower in tandem.

The Boise, Idaho-based technology company also said its sales to Huawei “were down meaningfully” from anticipated levels prior to the Trump administration’s move to add the Chinese telecommunications giant to the U.S. Entity List. The White House’s decision effectively bars Huawei from doing business with American companies.

The VanEck Vectors Semiconductor ETF fell more than 1.5% between the losses in Micron, a 3.7% slide in Applied Materials and a 2% drop in Nvidia.

Semis are a “bellwether to watch: If they deteriorate, it could pretend a steeper decline,” said Bruce Bittles, chief investment strategist at Baird.

“And then you have the politics, and the key there is … whether or not it influences consumer psychology,” he added. “If it creates even more uncertainty, then we could have a problem.”

U.S. consumer spending slowed more than expected in August, according to a government report released Friday. Personal consumption expenditures, also known as household spending, edged up an adjusted 0.1% in August from July, when spending rose 0.5%.

The print represents consumer spending’s softest read since February and could suggest to policymakers that a critical driver of U.S. GDP growth is decelerating. Consumer spending accounts for more than 66% of total economic output in the United States.

Wells Fargo announced Friday that it has named Bank of New York Mellon Chairman and CEO Charles Scharf as its new chief executive officer. Scharf will assume his new role at the head of the nation’s fourth-largest bank on Oct. 21 and will represent the bank’s first permanent CEO since Tim Sloan resigned in March.

Wall Street ended the prior session on a lower note amid developments in the political firestorm and whistleblower complaint against the president.

Though the White House deemed the complaint inconsequential, House Speaker Nancy Pelosi said administration officials tried to cover up the president’s now-controversial call with his Ukrainian counterpart. The call between the two heads of state has sparked an impeachment inquiry among delegates at the House, who claim Trump and his staff tried to coerce Ukraine into investigating political rival Joe Biden and his son, Hunter Biden.