Latest News
Home /One auto stock could fall by more than 18% before bottoming, technical analyst says

Auto stocks are in reverse.

Ford and General Motors have plummeted this week, weighed down by weak third-quarter sales and a GM workers strike that has stretched into a third week.

Newton Advisors’ Mark Newton says one of those stocks is a no-touch right here.

“Ford has literally been cut in half since 2013. It peaked right around almost $17 to $18 back in late 2013 and is about half of that, so a very difficult picture for Ford,” Newton said Wednesday on CNBC’s “Trading Nation.” 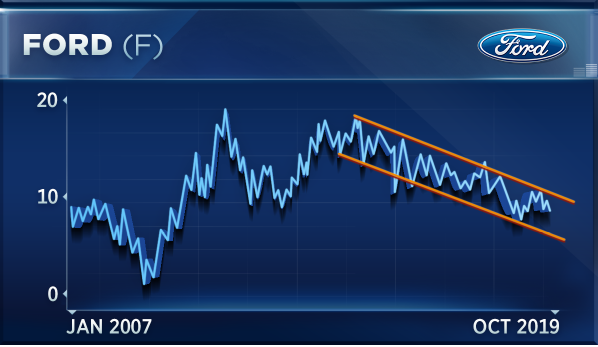 A decline as low as $7 implies nearly 19% downside. Shares haven’t traded that low in a decade.

Gina Sanchez, CEO of Chantico Global, says a broader industry shift could be underway that hurts the U.S. automakers in the long term.

“The idea of the auto cycle assumes that there’s sort of another leg up to this leg down that we’ve seen, and I think the bigger concern that many analysts are starting to pose is what if car ownership is due for sort of a shift in terms of just simply fewer people owning fewer cars? If consumers own fewer cars, then the auto industry itself is going to have to make adjustments to deal with that new reality,” Sanchez said during the same segment.

Even in the shorter term, Sanchez sees headwinds including trade tensions and a global slowdown that could challenge the auto stocks and the potential for any solid rebound.

“Whether or not we go into recession, you’re going to have a hard time finding purchase until we start to see stronger fundamentals, and I don’t see those for the better part of a year. So I think the auto sector is really, really a place to stay away from right now,” said Sanchez.