Wall Street’s final act of 2019 will hinge on whether investors should believe the messages being sent by corporate credit, crowd consensus and the calendar characteristics.

The broad market has been a sloppy stalemate between supportive and antagonistic forces for many months: The S&P 500 is hovering around the 3000 level it first reached in July – and is only up 4 percent from its January 2018 peak.

The global economic slowdown and flattening of corporate profits have held equities in check — leading to bouts of intense recession anticipation — while profoundly low global bond yields and a still-sturdy U.S. consumer have bolstered stock valuations.

Now — with the S&P up nearly 20% year to date but with the near-20% drop of a year ago fresh in mind — most investors, Cassandras and Polyannas alike, agree on a few things. Stocks are not cheap at close to 17-times forecast earnings, but also not terribly expensive, especially compared to bond yields. The Federal Reserve has cut rates twice and is quite likely to offer a third, even without severe weakness striking the U.S. economy. And while the economic expansion is looking mature, there aren’t bright flashing lights indicating an imminent recession. 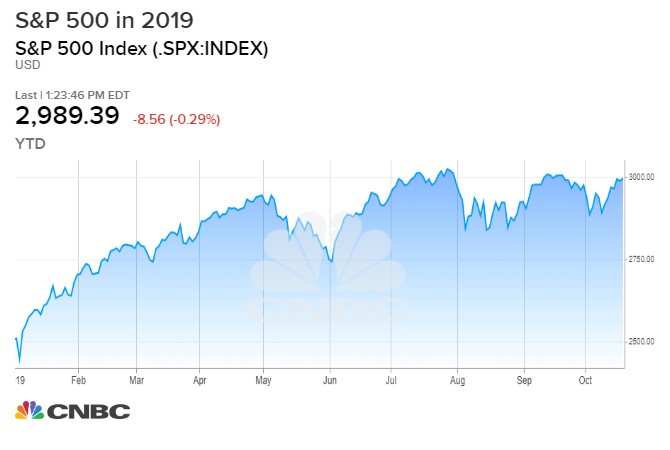 This leads to those three crucial factors under debate as the key to whether the market is preparing to break higher after a long bull-market intermission or not.

If a recession were ominously approaching, it would come as something of a surprise to the corporate-debt markets, which have a reputation for expressing worry about the economy and risks to company cash flows before stocks register them.

For now, the credit backdrop remains pretty benign, helped by an easier Fed and a global hunger for predictable cash yield.

The risk spread demanded by investors in the vast market for BBB-rated corporate debt has been steady, as seen here. Certainly this gap has widened from very tight readings back in 2018 but are not signaling stress or alarm about the availability of money for lower-rated issuers in the investment-grade universe. 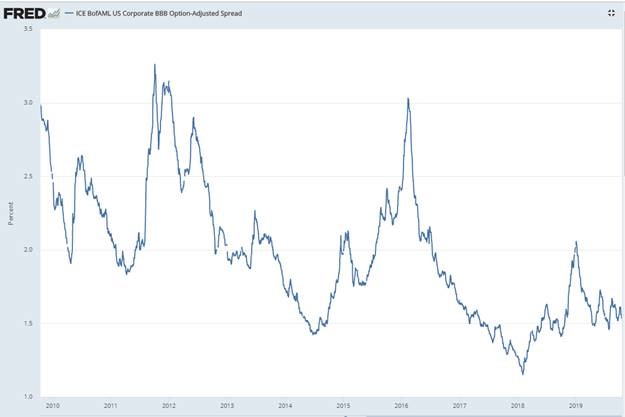 Citigroup strategists also point to the Fed’s bank survey showing that lending standards for commercial and industrial loans have not become particularly restrictive, which in their view hints that industrial production should reverse some of its recent drop. 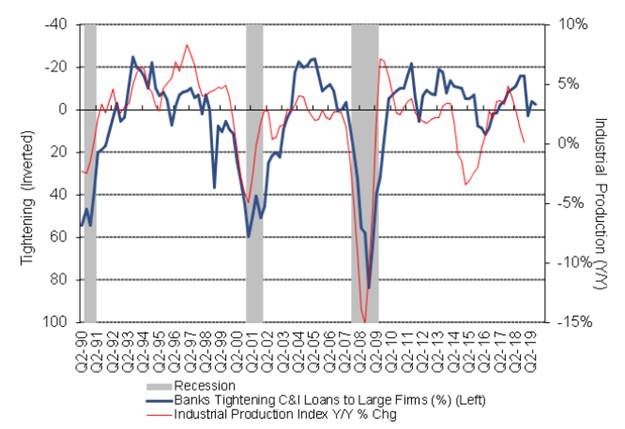 There are plenty of clear excuses to worry about the durability of the economy, including a still-unpredictable trade fight dampening corporate investment and CEO sentiment. And the more speculative fringes of the debt markets — such as bottom-rated CCC-rated junk bonds and bank loans to highly leveraged borrowers — are showing some outright vulnerability to higher default rates.

But, on the whole, credit is holding together and is not a reason to doubt stocks’ ability to make further progress from here.

The choppy August pullback in stocks, accompanied by a rush toward record lows in Treasury yields and sharp drop in global growth, took a toll on investor attitudes.

A mosaic of sentiment and investor-positioning gauges say the market mood is subdued, especially given the S&P 500 is within a small upward wiggle of a record high.

Ned Davis Research tracks a composite of trader-sentiment indicators, which this month fell to the “extreme pessimism” zone where stocks’ risk-reward prospects tend to improve. 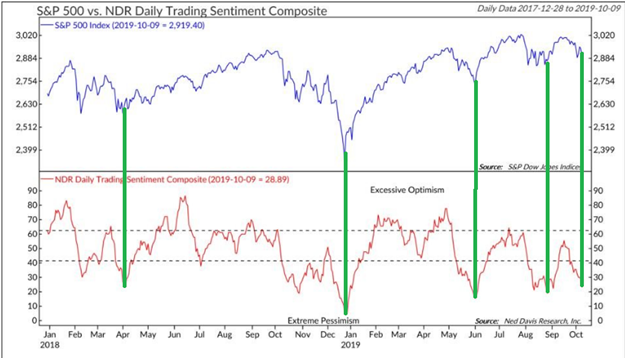 Retail investors for years have consistently harvested cash from the equity market and have been net buyers of bonds as yields have pressed lower. There is certainly a demographic tide involved, as an older population makes safety and retirement income higher priorities over capital appreciation.

But if nothing else, this pattern shows the lack of any kind of enthusiasm toward equities that would raise concerns about reckless greed inflating stocks.

Bank of America Merrill Lynch tallies the net flows across asset classes on a weekly basis, which shows the risk-averse move away from stocks and into bonds and cash.

As noted, this has been the general trend for much of this bull market, which of course has seen numerous nasty corrections and scares.

But that doesn’t change the fact that investors seem not to be expecting or playing for another leg higher in stocks – which is itself a net positive.

In 2018, as the market suffered a relentless liquidation culminating in a 20% three-month loss by Christmas Eve, every seasonal rule of thumb failed. Not simply the tendency of stocks to do well in November and December, but more detailed patterns. When the S&P 500 was up at least 10% through September the market “almost always” carried higher through December, etc.

This doesn’t change the fact that the broad sweep of history has shown a general bias toward strength at year end. And, yes, pre-election years have a more pronounced upside tilt (even granting that there just have not been enough presidential elections to make such analyses statistically rigorous). 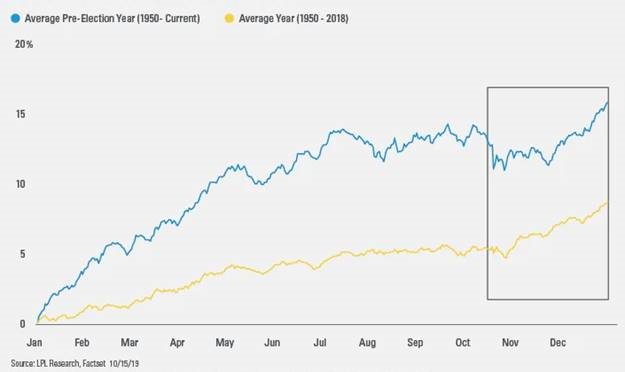 Last year’s experience might prompt even more skepticism about seasonal market indicators than usual, and understandably. But it’s worth asking: What are the chances that these guides will fail spectacularly two years in a row?

In all, the bullish case is starting to line up: Stocks have been resilient through a growth scare, trade-war flare-ups, an earnings-growth lull, yield-curve inversion and repo-market stress episode. Low bond yields and strength in defensive sectors and big growth stocks have carried the market, but early signs now show traction in cyclical, financial and global stocks – hinting at a more offensive tone.

Global leading growth indicators might have bottomed, the Fed appears on track to offer a third “insurance” rate cut, sentiment is cautious and credit still flowing. The next rally could prove a final flourish to the upside before a larger reckoning, but rarely do bull markets end by going sideways for 20 months and then falling apart.

The setup has improved, suggesting it’s now becoming the bulls’ game to lose.