Latest News
Home /Three things to watch for in the markets on Wednesday, including Boeing and Tesla earnings

Here are the most important things to know about Wednesday before you hit the door.

Boeing reports third quarter earnings on Wednesday before the market opens, but the numbers are largely secondary. Investors will be focused on updates about when the company expects the embattled 737 Max to be re-certified and flying once again. The company previously said it expected the jet to be back in business this quarter.

It’s also the first time Dennis Muilenburg will be on the record since he was stripped of the Chairman title earlier this month. The company decided to divide the CEO and Chairman role between two people so that Muilenburg, who will continue as CEO, can focus on the continued fallout from the deadly crashes earlier this year. The Boeing jet has been grounded since mid-March.

Boeing’s problems are escalating. On Tuesday the company announced that the head of commercial airplanes would step down amid the ongoing crisis, and last week internal emails revealed that a pilot had raised concerns about the safety of the 737 Max jet as far back as 2016.

Analysts are expecting the company to report earnings of $2.07 on $19.6 billion in revenue, according to estimates from FactSet. That compares to EPS of $3.47 and revenue of $25.15 billion in the same period last year. 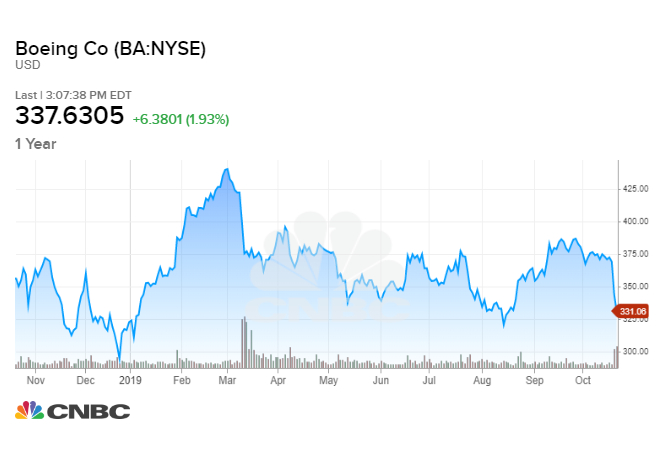 Tesla and Ford both announce quarterly results tomorrow after the market closes. 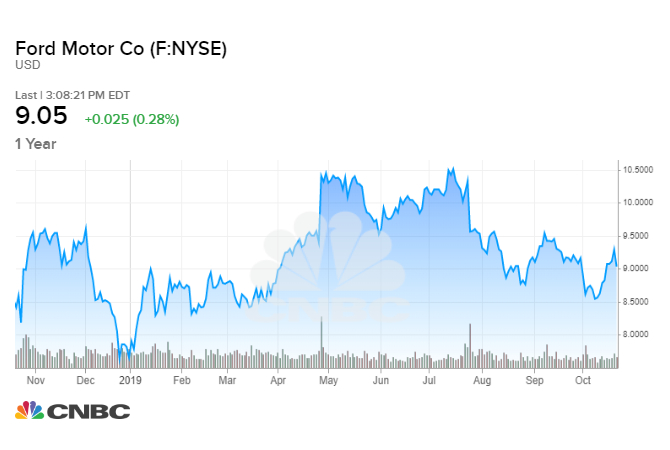 Analysts expect the company to earn 26 cents per share on $36.87 billion in revenue, according to FactSet, which compares to the 29 cents in earnings and $34.7 billion in revenue that the company reported in the same quarter a year ago. Earlier this month Ford announced that sales sank 4.9% in the third quarter, hurt by a slowdown in demand for pickup trucks.

Investors will be looking for an update on the company’s autonomous vehicle fleet, which the company hopes to roll out by the end of 2021.

When it comes to Tesla’s third quarter, two things will be at top of investors’ minds. First will be an update on demand in China as the new Gigafactory in Shanghai prepares to open, and second will be if the company is on track to start delivering its crossover Model Y vehicle by the end of next year. The company will also likely provide an update on whether the pickup truck is still expected to launch next month, following a series of delays.

Analysts are expecting a loss of 46 cents per share, and $6.43 billion in sales, according to estimates from FactSet.

“As always, accurately predicting quarterly results will remain a challenge for the next few quarters, particularly because it’s difficult to pinpoint the exact timing of Tesla’s new facility in China – not to mention the launch timing for the Model Y crossover. While these initiatives create modeling headaches, we think they will position Tesla favorably in the medium-to long-term,” Piper Jaffray’s Alexander Potter wrote in a note to clients. His forecast of a 12-cent loss for the quarter is well ahead of consensus estimates.

Microsoft reports first-quarter earnings tomorrow after the market closes. Analysts polled by FactSet are looking for earnings of $1.25 and $32.15 billion in revenue.

“Microsoft continues to benefit from its strong positioning across major secular compute themes … This, coupled with a constructive IT environment, strong execution, and expense discipline, should enable operating profit … generation to outpace revenue growth in coming quarters and upside to current FY20E estimates,” Stifel analyst Brad Reback said in a note to clients. He’s expecting the tech company to post earnings of $1.26 and $32.21 billion in revenue, putting him ahead of the Street average. 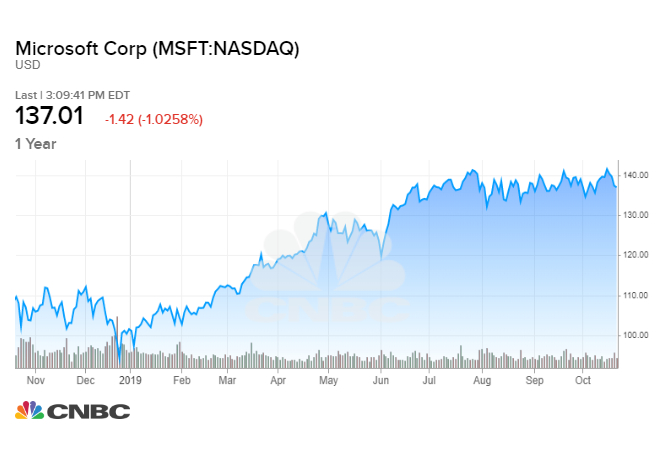 One particular point of interest for investors will be how Microsoft’s cloud offering Azure performed. Last quarter revenue from the cloud increased 64% year-over-year, although this was the slowest rate in at least four years. Microsoft does not disclose exact numbers for its Azure unit, but Nomura’s Christopher Eberle is expecting growth of 61.6% year-over-year.

Shares of Microsoft have gained 35% this year, pushing the tech giant’s valuation over the $1 trillion mark. In some sense, the stock’s stellar performance puts it at a disadvantage.

“We remain buyers, but expect near-term stock gains to be more incremental given the sheer size of the company,” Reback said.

Boeing (before the bell)

Boston Scientific (before the bell)

Caterpillar (before the bell)

Eli Lilly (before the bell)

Blackstone (before the bell)

Anthem (before the bell)

General Dynamics (before the bell)

Freeport-McMoRan (before the bell)

Hilton (before the bell)

Norfolk Southern (before the bell)

Waste Management (before the bell)

eBay (after the bell)

Microsoft (after the bell)

PayPal (after the bell)

Tesla (after the bell)

Lam Research (after the bell)

O’Reilly Automotive (after the bell)