Latest News
Home /JP Morgan says the market is doing so well, it could hit its 2020 forecast this year

Traders work on the floor of the New York Stock Exchange

Positive signs on the U.S.-China trade talks prompted investors to dive into stocks again, and J.P. Morgan believes the rally is here to stay and the market could reach the bank’s 2020 target eight months early.

“Looking ahead, given improving trade rhetoric, the market could reach our 2020 midyear price target of 3,200 sooner (by late 2019 or early 2020),” Dubravko Lakos-Bujas, the firm’s chief U.S. equity strategist, said in a note to clients on Monday.

The S&P 500 hit a fresh all-time high at the open on Monday, supported by solid earnings and progress on trade. J.P. Morgan sees the benchmark rising about another 6% in a few months to reach its 2020 midyear target from Friday’s close at 3,022.55. 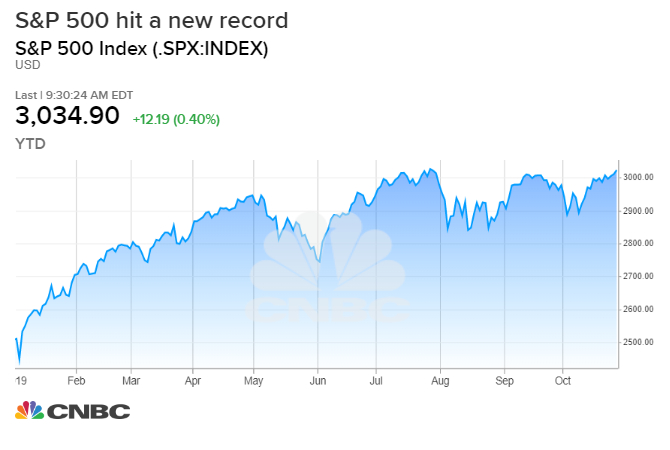 Stocks got a big boost after U.S. and Chinese officials said they were “close to finalizing” some parts of a trade agreement, paving way for a bigger deal. J.P. Morgan said hedge funds and other players will continue to ramp up their equity exposure, which will keep the rally going.

“The upside should be supported by still very low net positioning across discretionary equity and macro hedge funds, as well as systematic approaches,” Lakos-Bujas said.

If the U.S. and China decide to unwind the tariffs in place, the S&P 500 companies could see a more than 25% earnings per share growth, J.P. Morgan predicted.

“This catalyst would likely release pent-up demand from businesses and consumers. Even if existing tariffs remain in place and no new tariffs are announced, we would expect fundamentals to improve starting in 4Q,” Lakos-Bujas said.

Besides the trade optimism, seasonality is also on the bull’s side. The fourth quarter is seasonally the strongest for equities, delivering 4% return on average since 1948, according to J.P. Morgan.

Additionally, the market has been up 90% of the time in the one year run-up to a presidential election with an average gain of 12% on the S&P 500 post World War II, the bank noted.