A man using an angle grinder on a steel piece at a metal fabrication company on August 7, 2018 in Orange County, New York.

A gauge of U.S. manufacturing showed the sector continued to contract in October, the third straight month of slowdown amid global trade uncertainties.

The purchasing manufacturing index from the Institute for Supply Management came in at 48.3% last month, compared with a 47.8% reading in September. But it was below economists’ expectations of 49.1%. A number below 50% represents a contraction in the industry. 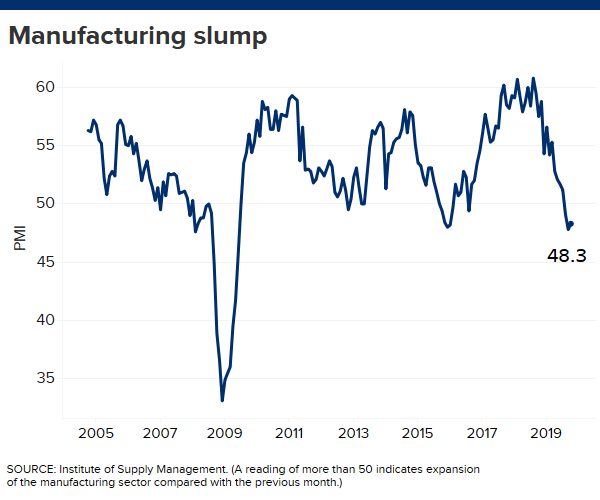 The sector showed its first contraction in a few years in August, ending a 35-month expansion period where the PMI averaged 56.5%, according to ISM. The manufacturing gauge had its lowest reading since June 2009 in September as exports dived amid the escalated trade war.

The continuing contraction showed the challenging environment U.S. manufacturers are faced with amid the escalated trade war between the U.S. and China. Manufacturing was once considered a big winner under the Trump administration with improvements in employment and activity over the past few years.

“Comments from the panel reflect an improvement from the prior month, but sentiment remains more cautious than optimistic,” Timothy Fiore, chair of the ISM Manufacturing Business Survey Committee, said in a statement.

Prices decreased for the fifth consecutive month and at a faster rate with the prices index registered 45.5% in October.

“The outlook for nation’s factories isn’t growing any worse and the manufacturing recession isn’t intensifying,” Chris Rupkey, chief financial economist at MUFG, said in a note. “There are even some green shoots for the manufacturing sector as orders are picking up and orders lead the way forward for production and output and jobs.”