The major stock averages rose slightly on Friday, notching fresh record closing highs, as Wall Street capped off a week in which trade optimism sparked a massive rotation out of bonds and into equities. 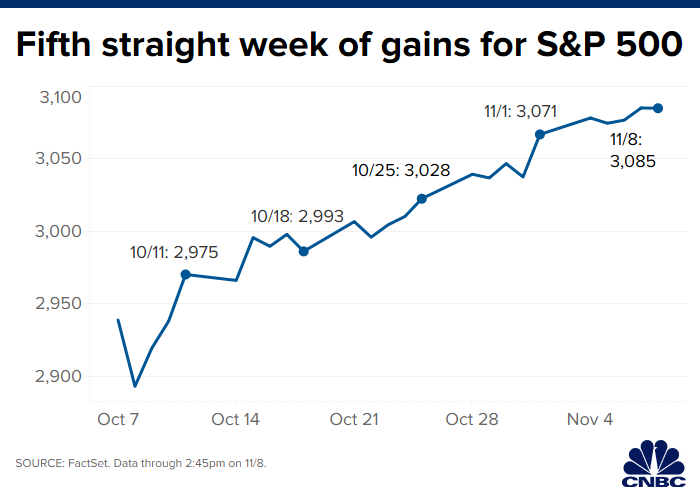 “The trade narrative seems to be inching closer to some form of a ‘phase 1 agreement’ based on the recent flow of headlines,” said Michael Schumacher, global head of rate strategy at Wells Fargo Securities, in a note. “We have all seen this movie before, so we are not ready to call it a done deal.”

A spokesperson for the Chinese Commerce Ministry said Thursday that China and the U.S. had agreed to cancel existing tariffs in phases. A U.S. official also reportedly said both sides agreed to roll back the levies in tranches.

The risk-on sentiment and improving tone around trade took a big bite out bonds. The U.S. 10-year Treasury yield jumped more than 15 basis points at one point on Thursday, its biggest upward move since the 2016 election. The 10-year rate hovered around 1.92% on Friday after starting the week near 1.75%. Yields move inversely to prices.

“Positioning was so offsides,” said John Davi, chief investment officer at Astoria Portfolio Advisors. “People were buying bond-like proxies, buying fixed income and selling actively managed mutual funds and equities. So any sort of progress towards China and you’ll get this sort of rally.”

Sentiment was also boosted this week by corporate earnings results that have generally beaten expectations. Of the 452 S&P 500 companies that have reported thus far, 74% have beaten estimates, according to FactSet.

Most recently, Disney posted better-than-forecast quarterly numbers, sending the stock up 3.8%. Disney’s revenues for its media and networks segment topped a FactSet estimate, while sales for the company’s parks, studio entertainment and direct-to-consumer businesses also beat expectations. The stock also got a lift from increasing enthusiasm around next week’s launch of Disney+.

To be sure, Trump threw cold water on recent U.S.-China trade optimism by saying Friday morning he has not agreed to roll back existing tariffs. Stocks fell to their lows of the day on those comments.

“Yearlong, we’ve been going back and forth with the tariffs,” said Kathy Entwistle, senior vice president of wealth management at UBS. “Things look good and the market goes up. Then someone says, ‘no that’s not what we said’ and the market goes down.”

“We have to be cognizant that this can still happen,” Entwistle said. But “when you get clarity, you get more excitement in the markets and you realize there’s more opportunities for them to go up.”