Rep. Peter King, R-N.Y., talks with reporters at the base of the House steps after the last votes of the week on April 13, 2018.

Yet another House Republican retirement just under a year from the 2020 election could make the GOP road to reclaiming a majority in the chamber tougher.

Rep. Peter King, a 75-year-old Republican who represents a district on New York’s Long Island, announced Monday that he would not run for reelection next year. The 14-term GOP congressman cited a desire to spend more time with his family. His decision makes his district an even more appealing target for Democrats: King won his race by about 6 percentage points last year.

The congressman’s retirement adds to a growing list of GOP departures. He becomes the 20th House Republican during the current Congress — the first where the GOP was in the minority since 2011 — to announce they either will retire or will run for another office. Only eight Democratic House members fall into the same category.

Many of the Republican lawmakers represent districts the GOP should have little difficulty winning in 2020. Even so, GOP members including King and Reps. Will Hurd, Kenny Marchant and Pete Olson, all three of Texas, and Rob Woodall of Georgia represent areas the House Democratic campaign arm has targeted for months.

The chart below shows the recent margins of victory for the retiring House Republicans. In cases where races have trended closer, it signals a potentially more competitive election next year. 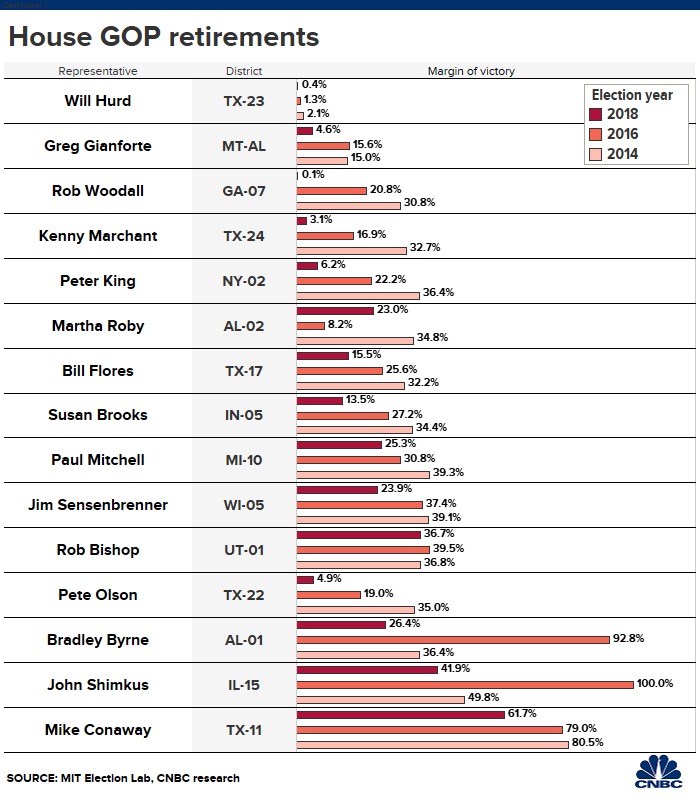 Only one departing Democrat appears on the House Republican campaign arm’s target list. Rep. Dave Loebsack, who won his Iowa seat by about 12 percentage points last year, is retiring. The GOP also looks to compete in California’s 25th District, a swing seat that sits vacant after Democratic Rep. Katie Hill’s resignation following allegations of an inappropriate relationship with a staff member.

Democrats hold a 233-197 edge in the House after the party gained about 40 seats in last year’s midterms. One member is an independent, while four seats are vacant.

The two major parties will fight for control of both the House and Senate in the 2020 elections. The races will have huge stakes for whether the next president can push economic priorities through Congress.