Latest News
Home /Warren Buffett has been on a bit of a cold streak, but that might be over as bank stocks rebound

Shares of RH surged Friday after word that Warren Buffett’s Berkshire Hathaway had bought a stake in the furniture retailer. What the crowd piling into the company formerly known as Restoration Hardware doesn’t realize is that the Oracle of Omaha has been on a bit of a cold streak.

The good news for Berkshire fans is that the ever-patient and long-term focused Buffett may be getting a hot hand again, just as the value investing philosophy he popularized comes back into favor on Wall Street.

Following the stock picks of the Berkshire portfolio would have underperformed a market benchmark by 2.5% the last three years, according to Symmetric.io, a data firm that uses proprietary calculations of the quarterly filings to uncover the best stock-picking investors. Berkshire’s stock itself has underperformed the S&P 500 over that time, perhaps reflecting the overall value bent of the conglomerate’s private business portfolio as well. 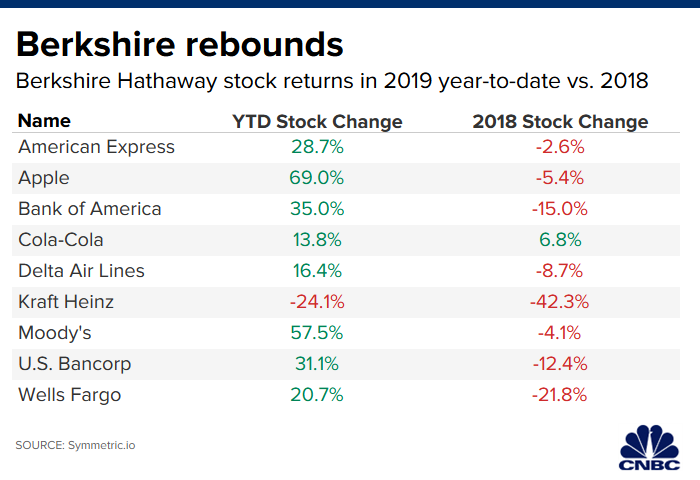 But 2019 is shaping up to be a rebound for the longtime investor and his value-hunting partners. He’s now beating the market benchmark by 1.2% over the last 12 months, according to Symmetric.

Sizable stock bets on financials like Bank of America, Wells Fargo and U.S. Bancorp, which saw negative returns of 15%, 21.8% and 12.3% in 2018, are breaking out this quarter. Only Wells Fargo — up 20.9% year to date including dividends and other income — is underperforming the broad S&P 500 in 2019. Berkshire slightly cut its stake in Wells Fargo, but kept its holdings pretty much the same with other big banks, according to the third-quarter filing.

Bank of America and U.S. Bancorp have returned 35.7% and 32.5%, respectively, this year after big bounces starting in October. The S&P 500, including dividends and other payments, is up 25.7%. 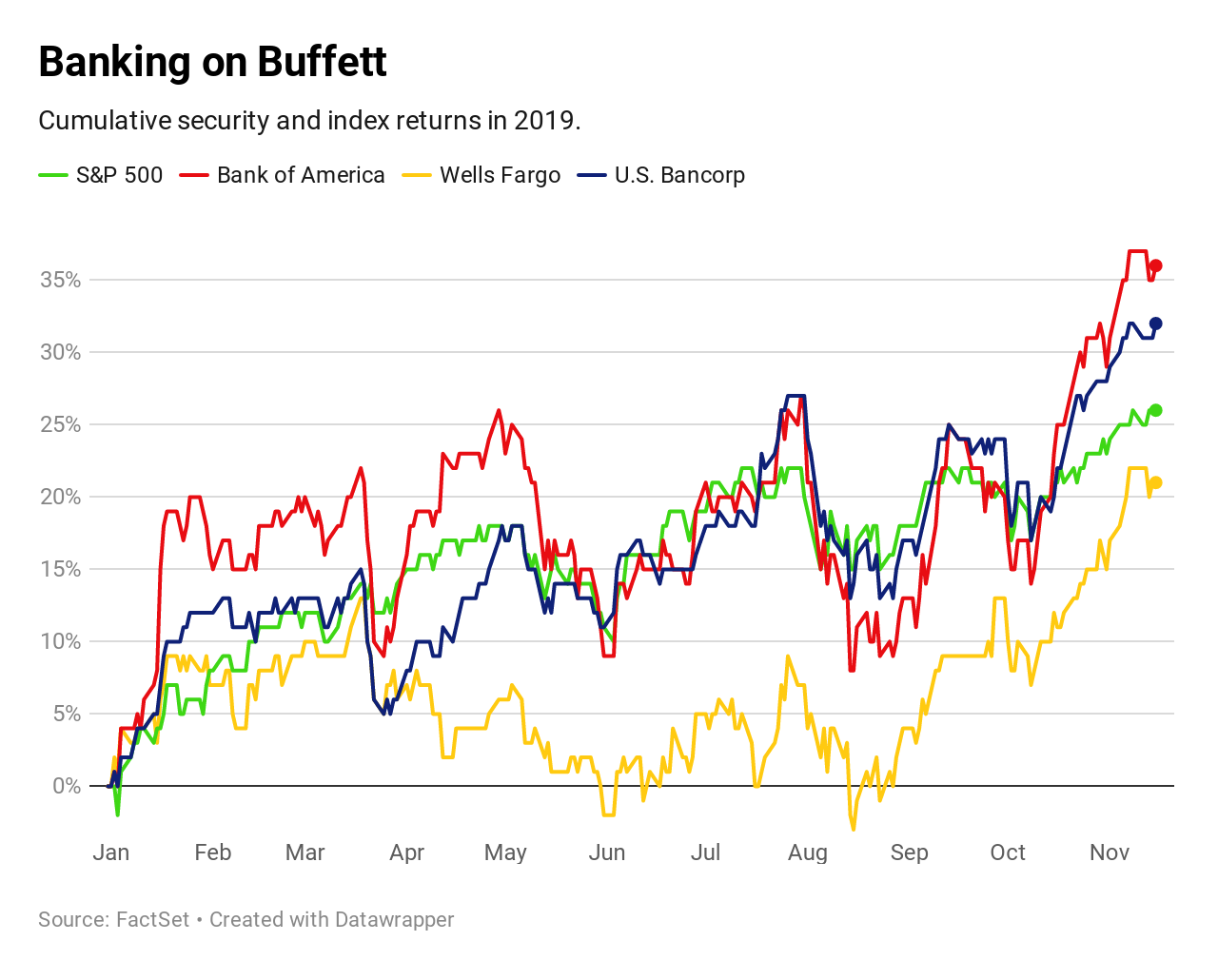 Berkshire disclosed its new holding in RH on Thursday, when government filings showed Buffett or one of his lieutenants bought 1.2 million shares during the third quarter.

Berkshire’s new stake in RH is worth $206.3 million as of Sept. 30, making it the fourth-largest stakeholder in RH, according to FactSet. The investment is one of Berkshire’s smallest by value.

The rebound for Berkshire also comes as the longest bull market ever (currently in its 11th year) pushes equities to new all-time highs and GDP growth estimates show signs of fatigue. Both the S&P 500 and the Dow Jones Industrial Average hit record intraday highs on Friday.

But some investors have taken more modest economic growth and expensive stocks as a signal to start looking for bargains, or investments with lower prices relative to fundamental metrics like dividends, earnings or sales. Examples of value stocks include J.P. Morgan Chase, Procter & Gamble and Johnson & Johnson — all three can be found among Berkshire’s holdings.

The Vanguard Value ETF, a fund that tracks the returns of large-capitalization U.S. value stocks, has either matched or outperformed the S&P 500 on a 3-month, 1-month and month-to-date time horizon.

That’s good news for Buffett, who has inspired a generation of investors with his hallmark frugal, bargain-based buying strategy. That no-frills philosophy has made the CEO of Berkshire one of the wealthiest individuals in the world with a net worth of over $85 billion, according to Forbes. Berkshire top investors Todd Combs and Ted Weschler are said to have similar long-term philosophies but seem to be more willing than Buffett to bet on technology.

Still, laggards in the Berkshire portfolio could keep Buffett’s gains in check. Abysmal performance at Kraft Heinz, for example, has led to a decline in total returns of at least 23% in 2019.