In a 2020 election where a handful of swing states will decide whether President Donald Trump gets another term in the White House, the president may need a strong economy to nudge him over the line.

He has already used it to make his case for reelection. During early campaign stops, the president has repeatedly pointed to an unemployment rate near its lowest level in 50 years, among other economic indicators that he says show his administration’s success.

CNBC looked at 13 states that are usually considered swing states or have grown more competitive in recent elections. In October, eight had unemployment rates lower than the national mark of 3.6%, while five stood higher. 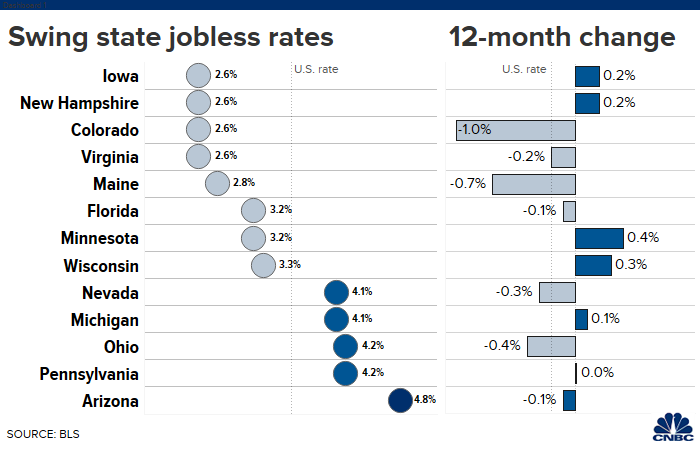 At the same time, six of the states had unemployment rates that rose from the previous year. The metric fell in six other states, while it was unchanged in Pennsylvania.

Arizona had the highest unemployment rate of the 13 states at 4.8%, followed by Pennsylvania and Ohio at 4.2%. Iowa, New Hampshire, Colorado and Virginia held the lowest marks at 2.6%.

Minnesota saw the biggest increase in the unemployment rate among those states, while Colorado enjoyed the largest decrease.

Three states that narrowly backed Trump in 2016 — Pennsylvania, Michigan and Wisconsin — delivered enough electoral votes to put the president in the White House. Along with those states Democrat Hillary Clinton lost in 2016, Democrats hope to flip the previously pro-Trump Florida and Arizona, among others.