Charles Schwab is in talks to buy TD Ameritrade, a source told CNBC’s Becky Quick on Thursday. A deal could be announced as early as Thursday.

“This would create a Goliath in Wealth Management,” Wells Fargo senior analyst Mike Mayo said in a note to clients on Thursday.

Shares of TD Ameritrade soared more than 24% in premarket trading on the report. Schwab’s shares surged 10%.

A deal between Schwab and TD Ameritrade would consolidate an industry going through massive disruption. In recent months, all of the major brokerages have announced plans to go to zero commissions. Schwab was the first of the major players to make the move, eliminating commissions in early October. Schwab’s competitors, including Fidelity and TD Ameritrade, were quick to follow.

Schwab CEO Walter Bettinger has been designated to run the combined company, sources said. TD Ameritrade CEO and President Tim Hockey said in July he is leaving the brokerage in February of 2020.

Schwab’s founder and Chairman Charles Schwab told CNBC’s Bob Pisani last month that consolidation in the retail brokerage industry is a “logical conclusion that will occur.”

“Certainty at the right valuation, we would do it, but we are really strong and very independent the way we do things, and so if its happens that it’s appropriate for our shareholders we will do it,” Schwab said in response to a question about whether Schwab is a possible buyer of another brokerage.

Not charging for trades is a boon for consumers, but it has left the brokerages scrambling to find ways to maintain profits.

“Consolidation thus far has been good and I think that will probably continue to be the case here,” said Devin Ryan financial analyst at JMP Securities. “The key thing is what does the consumer get out of this. Ultimately the consumer’s been treated very well with lower commission pricing, their getting paid more on a lot of different parts of the platform.”

After dropping commissions, Schwab’s stock was under pressure as investors worried that the lost commission revenue, which fed about $90 million to $100 million in quarterly revenue, would pressure margins. However, the stock has recovered, bolstered by strong earnings last month that showed client assets reached a record high in the third quarter.

Last week, Schwab showed that the free trading is paying off in terms of new client accounts. It said it added 142,000 new brokerage accounts in October, 31% more than the number of new clients added in September and a 7% jump from October of last year. The new accounts brought Schwab’s client assets to a record $3.85 trillion.

Schwab and TD Ameritrade are the two biggest publicly traded discount brokers. Schwab has a market capitalization of $57.5 billion and Ameritrade has a $22.4 billion market cap, 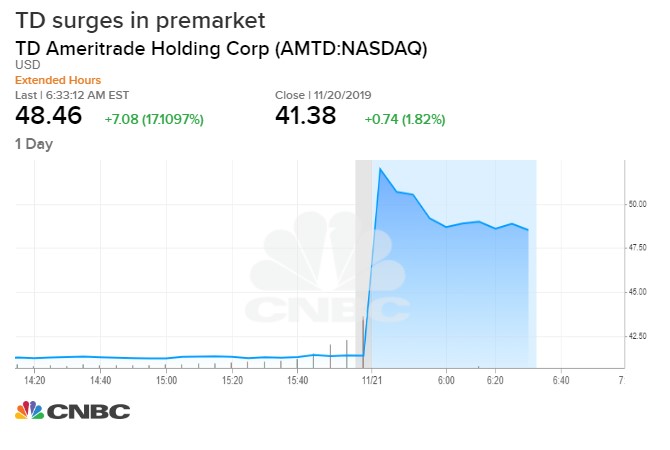 Shares of discount broker Interactive Brokers rose 2%  on hopes for further consolidation in the sector. ETrade Financial shares dropped 4.5% as many expected the broker to be the first acquisition target.

“Everyone’s been focused on E-trade being the potential consolidation target,” said Ryan.

—CNBC’s Becky Quick and Terri Cullen contributed to this report.