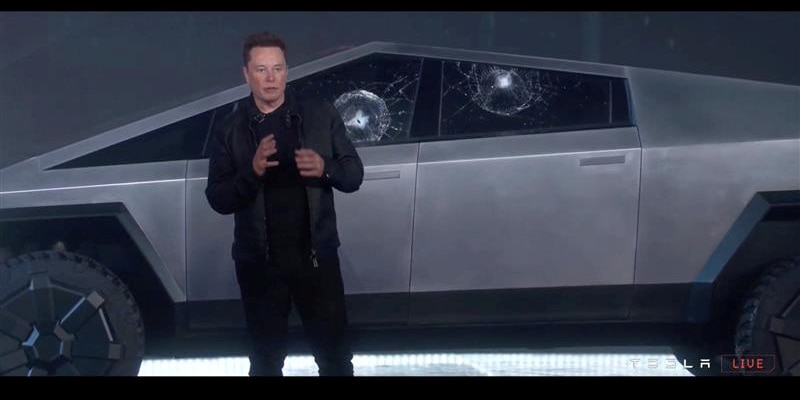 Tesla is cracking under pressure, much like the windows on its electric truck.

Shares of the electric-vehicle company fell as much as 4.1% in early trading Friday after it revealed its electric truck, called the Cybertruck, in a live event Thursday evening.

The truck has long been hyped by CEO Elon Musk for its futuristic design, inspired by the movie “Blade Runner.” During the live demonstration, however, things took an unexpected turn when Tesla’s lead designer Franz von Holzhausen threw a metal ball at not one but two of the truck’s “armor glass” windows, smashing them.

Musk was caught off guard and uttered an expletive before saying the ball “didn’t go through — that’s a plus side,” and telling the audience that Tesla would fix the problem “in post.”

The unveiling of the Tesla Cybertruck comes as competition in electric vehicles heats up. Recently, Ford unveiled its own mustang-inspired electric SUV, called the Mach-E, which analysts at Credit Suisse said could threaten Tesla’s position as the top EV maker in the US.

In addition, General Motors CEO Mary Barra announced Thursday that the company’s electric pickup truck will launch in 2021, Reuters reported. That’s around the same time that Tesla’s Cybertruck will hit the market, according to the report.

Tesla has gained about 6% year-to-date through Thursday’s close.