14-year-old Zaila Avant-garde says she hopes to see influx of Black and Hispanics follow her path.

By The Associated Press

LAKE BUENA VISTA, Fla. — Whether dribbling a basketball or identifying obscure Latin or Greek roots, Zaila Avant-garde doesn’t show much stress. Now she has become the first African-American winner in the 96-year history of the Scripps National Spelling Bee.

The 14-year-old basketball prodigy from Harvey, La., breezed to the championship Thursday night. The only previous Black winner was also the only champ from outside the United States: Jody-Anne Maxwell of Jamaica in 1998.

Zaila said she was fully aware that people were watching her and dreaming of following in her footsteps.

“I’m hoping that within the next few years, I can see a little bit of an influx of African Americans, and not many Hispanic people, either, so I’m hoping to see them there, too,” she said.

The bee has long been a showcase for spellers of color. Nine of the 11 finalists were of South Asian descent, and Zaila’s win breaks a streak of at least one South Asian winner every year since 2008.

Read on for four key steps any small business owner can take to help get ahead of the competition.

The runner-up on Thursday was Chaitra Thummala, a 12-year-old whose family recently moved to Frisco after living in in the San Francisco Bay area, where Chaitra won the regional title.

Zaila has described spelling as a side hobby, although she routinely practiced for seven hours a day. She is a basketball standout who hopes to play some day in the WNBA and holds three Guinness world records for dribbling multiple balls simultaneously.

Zaila twirled and leaped with excitement after spelling the winning word “murraya,” a genus of tropical Asiatic and Australian trees, in the competition’s 18th round. Moments before, Chaitra’s hopes were dashed when she misspelled “Neroli oil” — which is an essential oil produced from the blossom of the bitter orange tree.

Only one word gave Zaila any real trouble: “nepeta,” a genus of Old World mints, and she jumped even higher when she got that one right than she did when she took the trophy.

“I’ve always struggled with that word. I’ve heard it a lot of times. I don’t know, there’s just some words, for a speller, I just get them and I can’t get them right,” she said. “I even knew it was a genus of plants. I know what you are, and I can’t get you.”

Zaila only started spelling in time to qualify for the 2019 bee. But there isn’t much typical about a basketball prospect whose first choice for college is Harvard and wants to work for NASA if she doesn’t go pro in hoops. Her father, Jawara Spacetime, gave her the last name Avant-garde in tribute to jazz great John Coltrane. 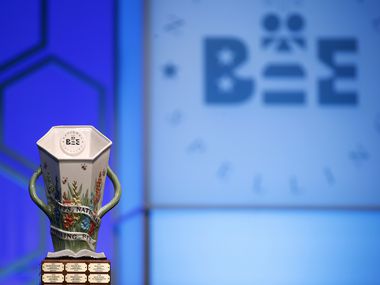 The two were eliminated back-to-back in the 12th round. Vivinsha was eliminated on the word “chrysal,” defined by Merriam-Webster as “a transverse line of crushed fibers in the belly of an archery bow beginning as a pinch.” Dhroov then stumbled on “cloxacillin,” an antibiotic used to treat a variety of infections.

This bee was different from any that came before because of the coronavirus pandemic, which led to the cancellation of last year’s bee. It was moved from its usual location just outside Washington, D.C., to an ESPN campus in Florida, and only the top 11 spellers competed in person. Previous rounds were held virtually.

Only spellers’ immediate families were allowed to attend, in contrast to the hundreds of fans and former spellers who normally pack the bee ballroom. There was, however, one high-profile fan in attendance: first lady Jill Biden.

The first lady, an English professor at Northern Virginia Community College near the nation’s capital, also attended the 2009 bee. The seasoned public speaker told the spellers she was once crippled by stage fright.

“In sixth grade I was my school’s spelling bee champion. I had a chance to go to the next level, but on the day of the regional competition, I told my mother that I was sick,” Biden said. “The truth was that I was too nervous to go, so I have incredible admiration for each and every one of you.”

The competition itself was hardly recognizable compared to the most recent version. In 2019, Scripps’ word list was no match for the deep and talented field, and the bee ended in an eight-way tie.

This year, five of the 11 finalists were gone after the first round, and Zaila emerged as the champion in just under two hours. Had the bee reached the two-hour mark, a new lightning-round tiebreaker would have determined the winner. The field was perhaps thinner than usual because of the 2020 cancellation, which denied a strong crop of eighth-graders of their best chance at winning and prevented younger spellers from gaining valuable experience.

Zaila will take home more than $50,000 in cash and prizes. She used the $10,000 prize from an online bee she won last year to pay for lessons with her coach, 2015 Scripps runner-up Cole Shafer-Ray, who charges $130 an hour — part of a burgeoning industry of private tutors who work with most of the top spellers.

Chaitra, the runner-up from Frisco, is also a student of Shafer-Ray’s and, with two years of eligibility remaining, is already among the favorites to win next year’s bee.